The Aero Booster is the fifth of Ha-Ya-To's Battle Machines.

After the attack of the Sonic Raven, Sensei Keiken asked Ryo to build a new aerial battle machine. In the time he was working on the Aero Booster he finished Blazing Falcon first to aid Exo-Force immediatly in the air. When he finally finished the Aero Booster, he gave it to Ha-Ya-To to test it for the first time. Ha-Ya-To, who loves being in the air and going fast, found the battle machine amazing. During the test he encountered the Combat Crawler X2. After defeating the carrier unit of the Combat Crawler X2, the Iron Condor II detatched itself from the main body and attacked Ha-Ya-To's battle machine, detaching it from the booster pack. After they crashed, the Robot's battle machine cut one of the electricity cables, however Ha-Ya-To used it to electrifiy the robot which resulted in its defeat.

Later, he was sent on a mission to recover a back-up CD, which was a trap of Meca One to render the Golden City unprotected. After the realization of the trap they returned to the Golden city to desperately defend the city, for the robots sent out an all-out attack to take over the city once and for all. Along with Hitomi, he defend bravely the gate but they were no match for the Mobile Devastator. As Ha-Ya-To looked at the robots, he noticed that they were shutting down due to Ryo's improvised portable jammer and the city was saved.

Later, Ha-Ya-To took the River Dragon and left the Aero Booster at the Golden City.

It is a small blue and yellow battle machine with a large detachable booster pack that allows it to reach extremely high speeds in the air. The booster pack is made to be very lightweight, and can be carried on the ground. Built by Ryo from designs downloaded from the golden computer, Aero Booster is a standard battle machine body with a massive, detachable rocket and weapons pack. This amazing piece of machinery allows the Aero Booster to achieve speeds even exceeding that of the Sky Guardian, as well as giving it weapons power superior to any other battle machine in the entire Exo-Force team.

According to Ryo, the Aero Booster is fast enough to outrace a Sonic Phantom or fly into sub-orbit, and strong enough to punch through a 6-foot-thick wall.

Piloted by Ha-Ya-To, it is probably the most powerful defender of the golden city and the Mobile Devastator was the only battle machine in existance capable of standing up to it.

An interesting and undocumented play feature, the Aero Booster can connect to the Iron Condor II, since it shares a similar connector as the Combat Crawler X2. 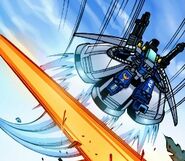 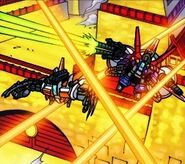 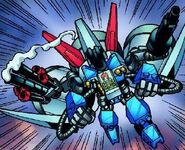 Blue Falcon's cockpit view
Add a photo to this gallery

Retrieved from "https://exo-force.fandom.com/wiki/Aero_Booster?oldid=17248"
Community content is available under CC-BY-SA unless otherwise noted.