The Assault Tiger is Takeshi’s fourth and final Battle Machine.

The Assault Tiger was given to Takeshi by Sensei Keiken. Later, he received the mesage that Sensei Keiken had been captured. As Takeshi, Hikaru, Ryo and Ha-Ya-To entered the Deep Jungle in their new Battle Machines, they were attacked by some strange plants. Takeshi uses the Buzzsaw of the Assault Tiger and cut the plants. Later, the team was attacked by Arachnoid Stalkers and Dark Panthers, The team activate their Mini Bots, and the Assault Tiger activates the Mini Heat Bot. The Mini Heat Bot helps him to remove a Dark Panther. Finally, the Robots activate their Mini Bots.

Takeshi's new heavy-duty Battle Machine is built just the way he likes them: huge, tough, and almost impossible to knock down. With its tiger-stripe camouflage, spinning buzzsaw and transforming mini-robot weapon, it's ready to take on any foe. It has huge legs and sleek yellow armor with red stripes. Its 'Tiger's Roar' causes disorientation and interferes with the mechanics of the robots. With its heavy armor plating and massive leg stabilizers, the Assault Tiger is a hulking brute of a combat machine, and its adaptive tiger-stripe camouflage lets it blend in with the underbrush of the Sentai Jungle before attacking with its immense diamond-edged cutter blade and disorienting “Tiger’s Roar.” It’s even got a long-range plasma burst cannon that can convert into a buzzsaw-armed mini-robot drone for up-close combat. The only downside? With all of that armor and firepower clanking around, the Assault Tiger is pretty much the loudest thing in the jungle. And that’s just how Takeshi likes it, too. 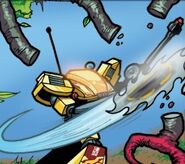 The Assault Tiger in action!

The Assaut Tiger against a Dark Panther! 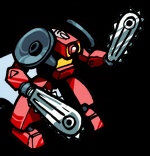 The Mini Heat Bot
Add a photo to this gallery

Retrieved from "https://exo-force.fandom.com/wiki/Assault_Tiger?oldid=17223"
Community content is available under CC-BY-SA unless otherwise noted.