When they found the Golden City, Hikaru, Takeshi, and Ryo were given the Cyclone Defender, Sky Guardian and Blade Titan Battle Machines by the computer. After discovering the position of the second of a series of codes demonstrated to be invaluable, the robots attacked the Golden City. Each pilot took a Battle Machine, with Takeshi piloting the Blade Titan. During the battle, he ran into the same problems as the others, as he was unfamiliar with the Battle Machine’s controls and equipment. The three eventually recovered the code.

Takeshi and Hikaru were sent to another Code's location, but were attacked by Claw Crushers. During the struggle, a Claw Crusher escaped and took the code. After transferring refugees from the Sentai Fortress to the Golden City, Hikaru, Takeshi, and Ryo went to look for another code. When they were assaulted by Iron Condors, Takeshi and Ryo gave Hikaru cover to retaliate. Takeshi found the Code and they returned to the city. Hikaru threw the Blade Titan into the battle, with Ha-Ya-To and the Golden Guardian. Though they were losing ground, the newfound code activated a Jamming Field which disabled the robots around the city. A second attack prompted Hikaru, Takeshi and Ha-Ya-To to defend the city once again. After many other battles Hikaru, Takeshi, Ryo and Ha-Ya-To were sent to retrieve a disc with important data from the Sentai Fortress. There, they were confronted by Robot Battle Machines, and became suspicious. They returned to the Golden City.

At their arrival the team went to the Golden Tower, where they found a robot doppelganger of Sensei Keiken destroying the Jamming Field. This sabotage signaled another attack. The Mobile Devastator began to penetrate the outer walls, and Takeshi and Hikaru defended the Golden Tower. Ryo’s improvised Portable Jammer froze the drones and saved the City.

The Blade Titan was left behind in the Golden City in favor of the more suitable Assault Tiger when the Exo-Force team was sent into the jungle.

Takeshi discovered this battle machine in the Golden Tower shortly after abandoning the badly damaged Grand Titan. Heavily armed and armored, it proved extremely effective against robot Shadow Crawlers in its first battle. More powerful offensively than the Grand Titan, its double-bladed assault shield also makes it a strong defense against robot attacks. Takeshi used this Battle Machine in the battle against the Mobile Devastator. 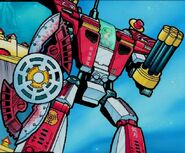 The Blade Titan on patrol

The Blade Titan against a Shadow Crawler! 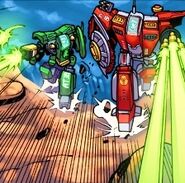 The Blade Titan enters the Battle!

The Blade Titan and the Sky Guardian fighting together!

The Blade Titan, the Sky Guardian and the Cyclone Defender against the Robots!

Takeshi at the controls

Blade Titan's cockpit view
Add a photo to this gallery

Retrieved from "https://exo-force.fandom.com/wiki/Blade_Titan?oldid=17477"
Community content is available under CC-BY-SA unless otherwise noted.