The Claw Crushers make up the bulk of the Robot Golden City War force.

The Claw Crushers make up the bulk of the Robot Golden City War force. A battle machine designed for use by a Devastator, the Claw Crusher is also mass-produced much as the Sentry was previously, though it's the same size as the sentry and produced at the same rate, it's actual design and appearance is much more like a thunder fury, it's weapon armament is the same, and the cockpit is well armored like the thunder fury, as opposed to the open-cockpit and controls of the Sentry; Though like the Sentry, it is considered expendable by the robots – therefore armor is sacrificed in favor of better armament. Claw Crushers are designed to attack en masse – so where one by itself might not seem overly formidable, dozens or hundreds working together are almost unbeatable. 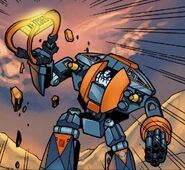 A Claw Crusher with a Code

Retrieved from "https://exo-force.fandom.com/wiki/Claw_Crusher?oldid=17252"
Community content is available under CC-BY-SA unless otherwise noted.