During the testing of the Aero Booster, Ha-Ya-To encountered the first Combat Crawler X2 unit. After apparently being defeated, the Iron Condor II dettached itself from the main body and attacked Ha-Ya-To's battle machine, causing the Blue Falcon to detach from the booster pack. After they crashed, the Robot's battle machine cut one of the electricity cables, however Ha-Ya-To used it to electrify the robot, resulting in its defeat.

As the Meca One Clone (Who was disguised as Sensei Keiken) destroyed the jamming field of the Golden Tower, appeared the second Combat Crawler X2 unit to secure the tower. After Hikaru attached a magnetic device on the spire of the tower turned the inside of the Golden Tower into a giant magnet and the Combat Crawler X2 was thrown against the wall, because of the attraction and was most likely destroyed.

Developed from stolen Golden City technology, the Combat Crawler X2 is a dangerous new addition to the robot  army. Its powerful legs enable it to scale sheer mountain cliffs or city walls, and anything that it can’t climb over, it can dig under with its armor-piercing claws or blast through with its top-mounted cannon. In battle, the Combat Crawler becomes twice as deadly, deploying its cockpit section as a separate battle machine designed for high-agility ground combat while the heavily-armed carrier unit fights autonomously, carrying captured Exo-Force prisoners in its armored cell.

An interesting and undocumented play feature, the Combat Crawler X2 can connect to the Blue Falcon, since it shares a similar connector as the Aero Booster. 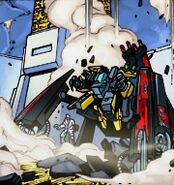 A Combat Crawler X2 inside of the Golden Tower

The Prison Cell of the vehicle.
Add a photo to this gallery

Retrieved from "https://exo-force.fandom.com/wiki/Combat_Crawler_X2?oldid=17169"
Community content is available under CC-BY-SA unless otherwise noted.