Ha-Ya-To and Hitomi first discovered the Golden Guardian in the Golden City after finding a code hidden in the ground. Ha-Ya-To first piloted it and used it to fend off a Sonic Raven and several Iron Drones attacking the Golden Tower. Though Hitomi was originally supposed to pilot it next, Sensei Keiken objected and she was never allowed to pilot it. (Later on in Exo-Force Secret of the Golden Tower she ends up piloting it for a little while without permission)

Ha-Ya-To’s battle machine is soon revealed to be only the first of five Golden Guardians, built long ago to defend the city from attack. The other four were discovered when the Exo-Force team entered in three new codes they found. This was a huge aid to the humans in the Golden City Era, even though the humans were far better pilots and used better technology, the robots had an extremely large force, even the entire group of four leading pilots (Takeshi, Hikaru, Ryo, and Ha-Ya-To), couldn't fend them off alone.

There were many other pilots that originally used smaller battle machines like the Gate Defender, but they were no match for the new robot weapons and armor, because of the discovery of more Golden Guardians, the humans had a huge advantage in technology and could have all their pilots in battle, this was probably a key reason why the humans were able to withstand robot attacks afterwards.

Discovered in a secret Golden City vault, the Golden Guardian Armed with a massively powerful mega-cannon arm and a nearly impenetrable blast shield, it has been assigned to Ha-Ya-To, who uses it to protect the Golden Tower. Although initially land-bound, the Golden Guardian is later fitted with jump jets to enable it to make rocket-powered leaps and even fly for short distances.

The first Golden Guardian to be found was by Ha-Ya-To and Hitomi, when they found its Code Brick. Ha-Ya-To used it to repel several Robot attacks, before he was driven into a trap, and shot down by three Shadow Crawlers.

Ryo has been seen fixing it, however it has not been used by Ha-Ya-To again. It was certainly assigned to a different pilot. 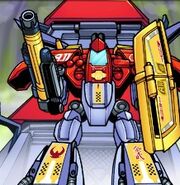 The Golden Guardian in action!

The Sniper Cannon of the Golden Guardian.

The Razor Shield of the Golden Guardian. 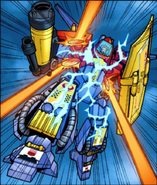 The destruction of the first Golden Guardian

Community content is available under CC-BY-SA unless otherwise noted.
Advertisement