The Hybrid Rescue Tank (Also called HRT for short) is Ryo's fifth battle machine - a large tank with two treads and a large rear wheel. The turret can convert to a reconnaissance aircraft, and the top laser cannon detaches, transforming into a flight minibot. Much of its design is based off the Mobile Defense Tank, but its main difference is that instead of two rear treads, it has one large wheel.

At the jungle the team was attacked by strange lived plants, and later was assaulted by Arachnoid Stalkers, on of them acceded to the Hybrid rescue tank, he shot other one with it gatling laser cannon, and they free their mini bots, the Mini Flying Bot from the Hybrid Rescue Tank and help him to fight, the River Dragon take the Battle Arachnoid from the HRT and sank it into the water. Ryo decides use the flight pod to scout the area and found the Sensei, but three Storm Lashers attack him, finally the robots activate their mini bots.

Ryo has been an inventor and engineer for most of his young life, and a good one, too. But he’s never seen anything like the Hybrid Rescue Tank that Sensei Keiken had built for him. Using cutting-edge Golden City technology and a unique tread/wheel traction system, it can roll over – or through – anything the robots or jungle can throw in its path. Its multi-barreled rotating blaster fires high-velocity bursts that can shred the armor of the toughest robot battle machines, and if that’s not enough, it’s got an arsenal of additional weapons and a transforming mini-robot drone to up the ante. Best of all, the top turret can detach and convert into a flying vehicle for scouting and recon missions. When the Exo-Force team rescues Sensei Keiken, Ryo’s planning to thank him by letting him drive the tank…at least for a couple of minutes, anyway. Nobody touches Ryo’s toys but Ryo, after all.

The HRT against two Arachnoid Stalkers! 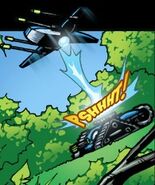 The Flight-Pod detaches from the lower half!

The Flight-Pod in the sky!

The detachable Jet as in the Set. 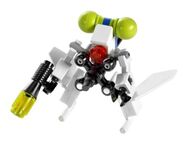 A closeup of the cockpit of the HRT.
Add a photo to this gallery

Retrieved from "https://exo-force.fandom.com/wiki/Hybrid_Rescue_Tank?oldid=17226"
Community content is available under CC-BY-SA unless otherwise noted.