The Iron Condors made up the majority of the robot sky force during the Golden City War.

The Iron Condors were first used in a special mission to plant a tracking/listening device on Ryo's Battle Machine, Uplink. They succeded in their mission but in a way failed since soon after the Iron Condors were destroyed and the tracking/listening device was short-circuted when Hikaru, Ryo, and Takeshi powered down the Sentai Golden City's cloaking device.

Iron Condors were used in many attacks against the humans and were used primarily because of their weapon effectiveness and ability to fly at high altitudes.

Piloted by a Devastator robot, the massive mechanical wings and supersonic speed make it competition for the Sky Guardian. Iron Condors almost always attack in pairs or groups of three and it is very rare to see one alone. Their armaments include razor-sharp talons and a missile that magnetizes its target, robbing enemy battle machines of their ability to maneuver. It also has an enhanced sensor package: night vision, telescopic zoom, infrared vision, 360-degree vision and mobile targeting array. 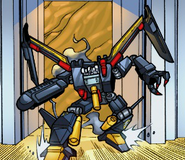 A Iron Condor stealing a Code.

A group of three Iron Condors. 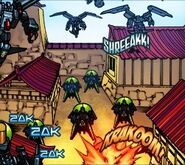 An Iron Condor escaping with a codebrick 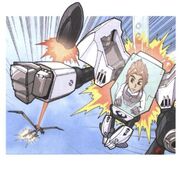 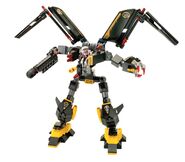 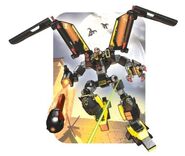 Retrieved from "https://exo-force.fandom.com/wiki/Iron_Condor?oldid=17254"
Community content is available under CC-BY-SA unless otherwise noted.