The Mobile Defense Tank, (or MDT for short) is a massive, twelve-wheeled tank with Intractium-steel-plated and originally created and piloted by Ryo to save Uplink.

Ryo built the MDT to save his previous battle machine, Uplink, which had been captured by the robots in a previous battle. Ryo drove the MDT to the western half of Sentai mountain, and rode into a (thought to be) abandoned set of Mines, where he met a teenage miner named Swift who had been left there when the robots took over the mountain, and had been trying to escape. Ryo offers to let him be his Gunner for the MDT, and Swift happily agreed. Soon they met up with a group of robots, but they are no match for the MDT, and Ryo continued to go deeper inside, soon they come upon a giant metal blast door, which Ryo hacks into with his computer, he opens it and they find themselves inside the robot base, where they quickly find Uplink hooked up to a bunch of wires. Ryo unplugs Uplink from the cables and wires, and ties Uplink to the back of the MDT and after a lot of interference from the robots, they escape back to the humans side of Sentai mountian.

Later on in a massive attack on the humans by the robots with there new super weapon, the Striking Venom, the MDT is used in battle against the robot battle machines.

According to Exo-Force Book 2: Attack of the Robots, the Striking Venom blasted the MDT and blew off it's right front tread and it is unknown what happened to it after that.

Otherwise in the comics, it is seen fending off the robots battle machines to buy time for Takashi's Grand Titan to be fixed in order to defeat the Striking Venom. The last image of it, is when Ryo is seen shooting down several Fire Vultures, before the Striking Venom opens fire on the MDT.

There were many hints to the Mobile Defense tank throughout the series, it was shown as a blueprint in the first Exo-Force video, and we see it in the comics a couple times hidden under a large cloth. It's design is a

12-wheeled tank, with 4 massive treads, off of the wheels there's a main cockpit that's heavily armored, and to the left and right there are two massive missile pod "arms". Above this there's a 6-barrel cannon with a laser on the left and a light-disk launcher to the right. This tank has shown its amazing abilities several times, it's able to destroy sonic phantoms with ease, and can make huge leaps across several feet as we saw in comic 15 and 16. 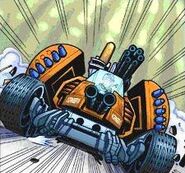 The Mobile Defense Tank in Action!

The Mobile Defense Tank and the Silent Strike joining the battle!

The MDT in action

Ryo at the controls
Add a photo to this gallery

Retrieved from "https://exo-force.fandom.com/wiki/Mobile_Defense_Tank?oldid=17117"
Community content is available under CC-BY-SA unless otherwise noted.