The Stealth Hunter was a flying Battle Machine used by the Exo-Force team. It was commonly piloted by Hikaru until he received the Silent Strike, at which point it was used by various unnamed members of Exo-Force.

The Stealth Hunter was the first battle machine that Hikaru piloted in combat. It was the battle machine which made the most trips to the Robot side of the mountain. It was used to rescue Takeshi's family, and also participated in the raid on the robots’ computer core and Ryo’s rescue.

The Stealth Hunter was the first Human Battle Machine to control a Sonic Phantom, using a weakness revealed by Yukio, during the inventor/pilot’s rescue. The Stealth Hunter was taken from Hikaru as punishment for his unwise solo flight into Robot territory. However, he was given the Silent Strike as a replacement.

The Stealth Hunters were subsequently mass produced, used by many flying members of Exo-Force. Hikaru’s unit was most likely reconstructed and added to the force.

The Stealth Hunter was fast and maneuverable, but lightly armored compared to the heavier ground Battle Machines. It had the ability to engage ‘stealth mode', making it invisible to almost all forms of detection. It was once disassembled and combined with the Grand Titan to make the Mountain Warrior. It was also rebuilt once, after sustaining heavy damage, into the Blazing Hunter using parts from wrecked Fire Vultures.

A Stealth Hunter in action!

Two Stealth Hunters, a Grand Titan and a Uplinks defending the City!

A Stealth Hunter with the Supernova 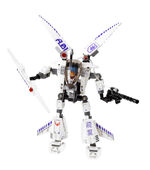 Retrieved from "https://exo-force.fandom.com/wiki/Stealth_Hunter?oldid=17089"
Community content is available under CC-BY-SA unless otherwise noted.