"Sensei gave me this one, the Supernova. That's not the best news the Robots heard today"
―Takeshi [src]

The Supernova was the second of Takeshi's Battle Machines and was a powerful battle machine that used solar energy as power source. It was destroyed in the Striking Venom Attack.

When Takeshi’s Grand Titan was unable to battle Sensei Keiken gave him the Supernova. When he left the Sentai Fortress he engaged battle with the robots. To stop the robots he melted two rocks together to gain a “gate”. However that wasn’t their biggest problem since the robot unleashed a new Battle Machine called the Raging Storm. After firing his blasters Takeshi saw that the armor was too strong to do damage to the robot. After this he used his Supernova together with the Stealth Hunter to let the Raging Storm attack them both on the same time. All the blast resulted in the feeder cable being broken.

After the Raging Storm was defeated, the robots captured Ryo and took him to the robot side of the mountain. Takeshi and Hikaru immediately went on rescuing Ryo. After defeating the robots defenses, they were able to get Ryo back to the Sentai Fortress.

The pilot could barely escape before the Supernova was destroyed. The Supernova landed on the bridge bellow, but it had sustained, as Ryo put it "Unfixable damage". Its parts were used to help build Takeshi's newer battle machine, the Assault Tiger.

The Supernova battle machine had deadly solar energy weapons. It is most famous when it fought against the Raging Storm.

The Supernova is ready for combat! 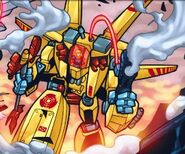 The Double-Barrel Laser Cannon of the Supernova

The Supernova fighting a Thunder Fury.

The Supernova with a Stealth Hunter!

The Supernova damaged beyond repair

The Comic of the Supernova

The Supernova's solar spear
Add a photo to this gallery

Retrieved from "https://exo-force.fandom.com/wiki/Supernova?oldid=17110"
Community content is available under CC-BY-SA unless otherwise noted.