"Uplink and I are a team. Between us there's nothing we can't do"
―Ryo [src]

Uplink was a Battle Machine created by Sensei Keiken and one of the mass-produced battle machines of Exo-Force. Ryo piloted his own version of it, modified for repair duties as well as combat.

When Ryo built Uplink, he thought that he would be able to fight the robots as well as conduct repairs. Instead, he ended up stuck in the repair bay. Ryo has a close connection with Uplink and would do anything to keep it safe. He spoke to the battle machine as if it were a real person, and treated it as his best friend. Uplink’s data core contained blueprints of all the human battle machines.

At one point, after Ryo had hacked the robot mainframe and deleted stolen battle machine plans, the robots captured Uplink to restore their databank. Ryo retaliated in the Mobile Defense Tank and retrieved Uplink.

Ryo used the Mobile Defense Tank more often in battles than Uplink, due to its combat superiority and usefullness in keeping Uplink out of harm's way.

When Ryo, Takeshi and Hikaru found the Golden City, Uplink's circuits were overloaded by feedback from the city's cloaking device. The battle machine became useless. However, after the discovery of the Cyclone Defender, Ryo was able to transfer Uplink's data core to it.

There were several Uplink models used by different pilots, but Ryo’s Uplink was more advanced than the others, chiefly due to the data it contained. Uplink was Ryo's first Battle Machine. It could be used to fight or to conduct repairs. It was noted that Uplink's data core was encrypted with an extremely advanced code, as it took three robots four hours to crack it. 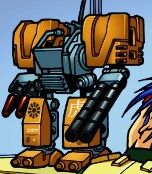 Uplink in the Golden Tower

Uplink on a Bridge 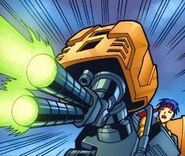 Two Uplinks and a Grand Titan in the Golden City

An Uplink, A Grand Titan and two Stealth Hunters defending the City! 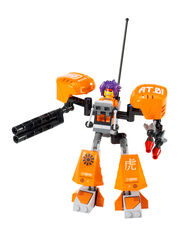 Add a photo to this gallery

Retrieved from "https://exo-force.fandom.com/wiki/Uplink?oldid=17091"
Community content is available under CC-BY-SA unless otherwise noted.